In 2005, while I was jogging, I felt a partial loss in my field of vision. Worried, I consulted several specialists, to no avail. Then, I saw a newly graduated optometrist who detected the first signs of multiple sclerosis. I was in shock. At that time, I was 24, an accomplished professional, a communications consultant for the government. It was the beginning of a period of denial that lasted 13 years. Receiving the diagnosis and feeling unwell were two totally different things. I really didn’t feel sick, so I didn’t bother telling those around me. But in reality, I could no longer feel my left leg…

Admitting that you’re disabled is a very difficult process. It’s hard enough to admit to yourself that you have a disease, but it’s even harder if the people around you don’t accept it.

In December 2018, I had my first appointment at the Centre de réadaptation Lucie-Bruneau with the person in charge of my file. During the meeting, as she was conducting her assessment to prepare my intervention plan, I thought: “Poor her, she doesn’t realize I’m going to get through this….” I was still in denial, but that was about to change.

At the beginning, she scheduled tons of appointments for me with various health professionals, who I refer to as my Earth angles, because they see the human being behind the disease: a psychologist, neuropsychologist, specialized educator, kinesiologist, speech therapist, social worker, physiotherapist, nutritionist, occupational therapist, dance teacher, and so on. My schedule was so packed with appointments I thought this massive rehabilitation effort was going to burn me out! I had to set limits!

While I was doing my best, I found it hard to be motivated. A few weeks later, the psychologist suggested that I lead the meetings for my intervention plans. That triggered my desire to find my way back to self-respect and to take care of myself, to get back to who I was. The disease suddenly became something I could accept.

Without the interventions of the Centre Lucie-Bruneau, I would not have been able to live as freely and to take charge of my disease. Instead of turning my back on it, I confronted it head on. My life is easier now, even if my vision is poor and I have difficulty walking.

The specialists at Lucie-Bruneau pulled me from the depths of despair. Thanks to their efforts, I love myself for who I am and I am able to function autonomously and safely. I came to realize I could have a good life even with limitations.

The greatest challenge has been to reprogram my life. There are many things I have had to learn to let go of: multitasking, reading a book, cooking, taking walks, having energy. However, the people at Lucie-Bruneau showed me how to cope. I now have a solid foundation to recreate my life and spread my wings. I can engage in all kinds of activities, but in a different form (reading an audio book, getting around with a walker, ordering prepared meals, etc.).

Last May, I made a significant donation to the REA Foundation because I felt accompanied, supported and accepted during the most difficult time of my life. I wish more than anything else that this organization would help other humans when adversity presents itself. By contributing to the Foundation, you can give meaning to the life of someone who can no longer see clearly.

When your life is turned upside down, from one day to the next, you have no choice but to reinvent yourself and recreate your life, so that it has meaning again. You need new guideposts. In my case, it was only possible with trustworthy people around me, who accepted me as I was. 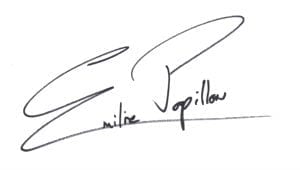